help explore sustainable maps- those that value creativity of youth and intergenerational open society investment audited by exactly opposite metrics from quarterly extraction by highly bordered systems of top-down planners- about us - most parents we have met anywhere see the future as being sustained by chidren's creativity- so where and why is it that UN reports so many of man's biggest organisations and professions no longer celebrate this most urgent determinant of sustainbility
-for example: to sustain jobs-creating education is to be for all, how do you all map collaboration now? -isabella@unacknowledgedgiant.com

the space at linkedin we use for rehearsing this is

LOL Learning on LinkI and Lynda

Is the world of MoocYunus possible

https://www.youtube.com/watch?v=Ome28Obiy4I In the milllennials world of Muhammad Yunus economics and education are designed so that there is no unemployment - job creation heroes are celebrated everywhere and through every childs access to an education that empowers their creativity.
LIVING WITH GREATEST CHANGE HUMANS HAVE JOYFULLY MAPPEDhttp://bracnet.ning.com/forum/topics/who-s-free-eu-who
What else is the internet and age of borderless connectivity for? http://rowp.tv/id93.html How can linkedin alumni reduce degrees of separation if 21st C is to be job enriching starting with those particularly girls, trapped in poverty in eras that proceeded our age of open learning and investing in sustainability goals http://amychina.net Should peace laureates like Yunus be one of the top 20 learning channels as 21st C satellite learning comes of agehttp://myeconomics.ning.com/forum/topics/survey-of-top-20-learning-channels-with-worldwide-satellite

Economistsocial.com and partners in publishing world record book of job creation and open education invite you to join in worldwide Surveying people who could most collaborate around map of future of education for all - vote for others to survey - rsvp chris.macrae@yahoo.co.uk

June 30 and Jul;y 1 are both the opening days of this 5 day event and the time when friends will be in flying in from around world to understand collaboration opportunities and try to map ongoing collaboration and  alumni networks

cheers
chris macrae -is it possible to change dc from epicentre of superpower to twin capital in youth creativty in time for beijing to prefer banking for youth creativity too?

dear taddy if these dates are not practical- we would love to celebrate a day in dc with you during your family's us trip this summer
Posted by chris macrae at 6:29 AM No comments: 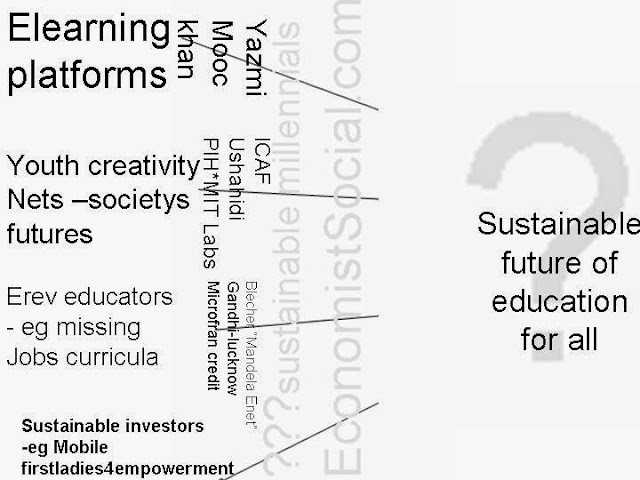 18-22 university age - this age needs he;p to chnage universities from separated certificate issuing monopolies to something more livelihood productive- putting this age group in student debt juits when 10 times more win-win social economies could be linking a bodreless world is the worst or meanest ideolgy any elder generation have ever committed on their children -

Posted by chris macrae at 5:50 AM No comments:

http://www.economistsocial.com 31 years ago my father at The Economist and I completed a book celebrating the wish that millennials would be empowered by exactly opposite capitals than 20th C superpower- join the campaign this summer to end dc as a capital of superpower and start dc up as a twin capital of youth creativity diary july 100 countries youth celebrate what 8 years olds are most curious about; august world leading under 35 open technologists meetup at world bank; september the pope gives congress a master class in preferential option poor; october world bank relocates its annual meetings to lima peru...... whats your http://www.economistdiary.com going to help millennials celebrate?

economistsocial.com publishers world record book of jobs creation
Posted by chris macrae at 4:18 AM No comments:

april 015 is for dialogue on most urgent practices of millennial learning  -eg social credit & solar &...

For eight years, Acumen invested patient capital in intrepid entrepreneurs who dared to focus on solving one of the biggest problems of our time. It’s helped them to build products, create awareness and drive down costs to bring energy to the poor. We’ve learned about customers’ evolving needs as the products and delivery systems have changed. There is clearly still a long way to go to get the products right, the financing right, and the distribution of solar products and systems right.
Posted by chris macrae at 7:44 AM No comments:

Email ThisBlogThis!Share to TwitterShare to FacebookShare to Pinterest
Home
Subscribe to: Posts (Atom)
Who's Who of Valuing Youth Most Collaboratively
No order intended
ICAF's Ishaq -20 years of olympiads bridging who celebrates youth in arts and sport; worldwide network or arts teachers and students up to age 12 thus linking all millennials nets from 8 up; maps of mentors and youth leaders in over 100 countries
W4Es naila chowdhury - mobile ambassador linking poorest and richest womens most human/sustainability goals
Taddy Blecher- greatest job creating curricula leader out of s.africa or anywhere!- curricula now specified back to 7th grade
Jagdish Gandhi founder of world's biggest school- city montessori Lucknow updates world citizen and vocational frames of gandhi and Montessori
Sir Fazle Abed - WISEs first educational laureate- almost everything www.brac.net is designed around education empowerment including 40000 village schools (primary)
Pope Francis - gutsy critic of every elder generation that has abandoned investment in its next genrartion's livelihoods and sustainabiliy
Jim Kim believer in millennials have tech and love to solve anything if only elders invested in Open system designs of Preferential Option Poor (POP)
Paul Farmer world practice leader of POP in healthcare
Tim Bernes-Lee -quartre of a centiry into trying to value web as for everyone especally children's learning
Jack Ma - China's beacon for Berners Lee's purpose of www

chris macrae
blog on how will your life change world with global communications youtube washington dc 1 301 881 1655 email chris.macrae@yahoo.co.uk linkedin 9500 skype chrismacraedc home of the 64 trillion dollar colaboration map , of the 7 curriculum millions of youth most need at free online university to sustain net generation's next 3 billion jobs and end poverty goals - a project of Norman Macrae Foundation- The Economist's Pro-Youth Economist and faciliator of net generation's Entrepreneurial Revolution dialogues since 1972